Up Close and Personal With Our Good Friend: The Sun by Sean Sellers

DISCLAIMER: Do not look directly at the Sun with your fragile human eyes!

We here in New Mexico love the Sun. It’s on the flag. We get 294 sunny days per year here in beautiful Las Cruces. So let’s talk about the Sun. This is the Sun News, after all. Earlier this year, the National Solar Observatory released their “First Light” images from the under-construction Inouye Solar Telescope (named after the late senator Daniel Inouye). The IST is currently being finished up in Hawaii, and represents a massive leap forward in solar astronomy. Its 13-feet wide primary mirror will look at the Sun with clarity never seen before. These first images, in addition to being mesmerizingly beautiful (in this columnist’s professional opinion), also represent the highest resolution images ever taken of the surface of the Sun. Here’s one of the images: 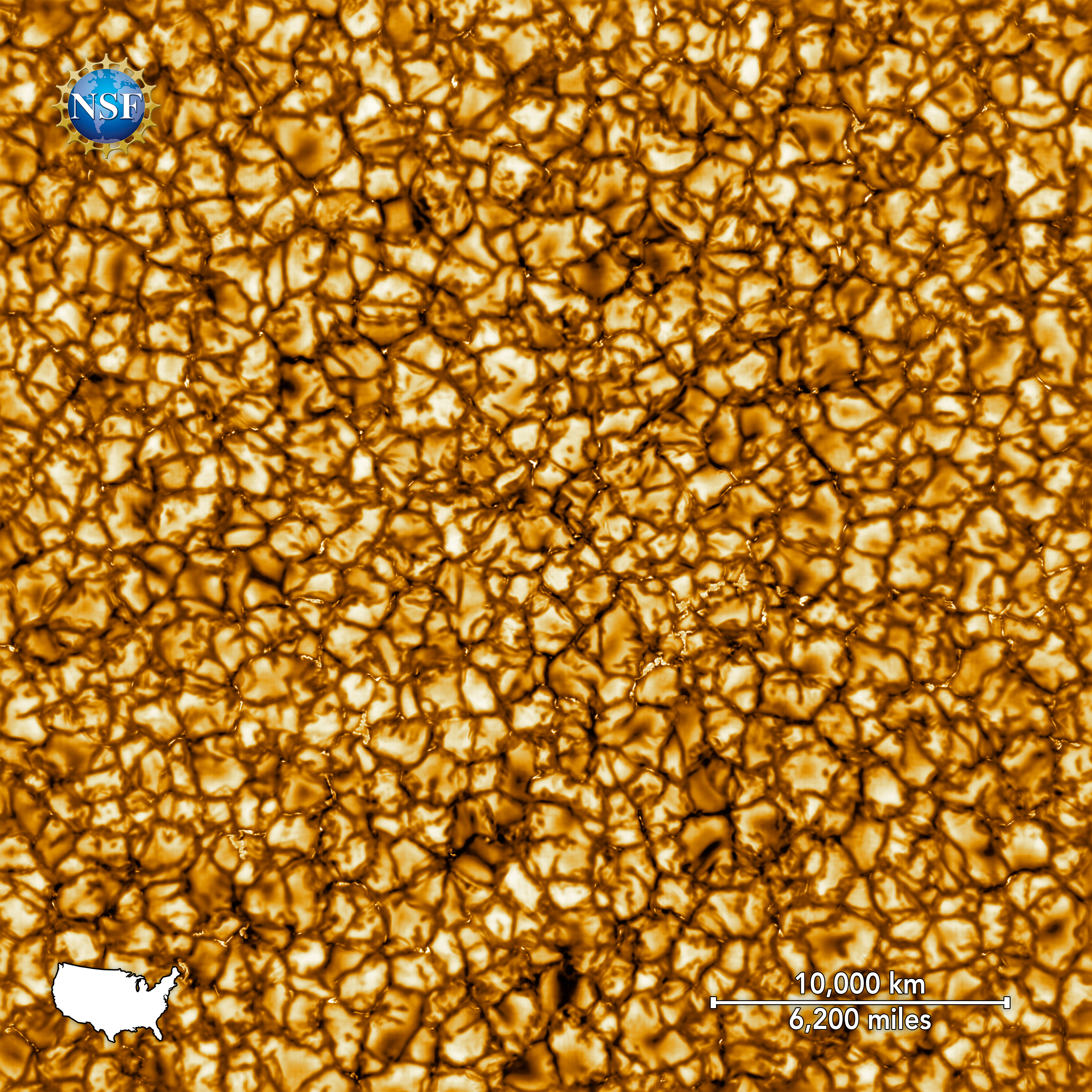 But what, exactly, are we looking at here?

I’m glad you asked! This picture shows a small part, 0.1%, of the visible surface of the Sun. This is pretty much what the Sun would look like if you got really close to it. Even though we call it
the surface, it is not solid. It is gas, more than a million times less dense than water. I would not advise trying to stand on it. For a variety of reasons. The pattern of dark and bright is actually a bunch of bubbles, which rise from the Sun’s interior, and, upon reaching the surface, cool off, and sink back down. If you’ve ever seen a lava lamp, you’ve seen this process in action! See
the map of the USA in the picture, for comparison? The bubbles themselves are about the size of Texas!

You said this is what the Sun would look like if I got real close. How close?

Fine. You’re gonna need to get real close. The smallest features in that picture are 18 miles across. Your eye is pretty good at resolving small things, but the Sun is 93 million miles away. If
you could look at the Sun right now (don’t), you would, at best, be able to make out features that are 15,000 miles across. To see details on the Sun like in this picture, you would need to get as
close as 125,000 miles from its surface. At this distance, the Sun would occupy 70% of the sky. Imagine that! You’d definitely go blind. And the heat would vaporize you. So.

Ah, but I brought my eclipse glasses!

I… huh. Okay. Well. First of all, and I cannot stress this part enough: DO NOT LOOK DIRECTLY AT THE SUN. Yes, eclipse glasses can protect your eyes from the Sun’s rays. But for this to work, you’re gonna need bigger eclipse glasses. Much bigger. Eclipse glasses work because they have a special filter in them that blocks almost all of the light that hits them. To be safe, they can only let 0.00032% of the Sun’s light through them. That’s a lot beefier than your standard sunglasses! So maybe if we get a lot more of that filter, we could swaddle ourselves in it and get within 125,000 miles of the Sun!

For this to work, though, you’ll need a lot. Remember, as we get closer, the Sun gets brighter. At 125,000 miles away instead of our cozy 93 million miles, the Sun would be over 500,000 times brighter. Oh boy. Okay, fortunately, we can just layer the film. Twice as much film should block twice as much light, right? So we need 500,000 layers of filter film. If the filter film is about half a millimeter thick, we need the final layer to be about 1,000 feet thick. You should probably wrap your whole body in this film, that way you’re insulated against the consequences of your actions. So we’re talking about a half mile wide blimp, floating dark and mysterious through the 93 million mile void between the Earth and the Sun. Godspeed, you bold and beautiful explorer, you. Godspeed.

Try none of this at home, though. In no circumstances should you steal a rocket from WSMR and duct tape yourself to it, swaddled in a filter cocoon, in a daring and novel attempt to visit the Sun. But if you do, let me know. Your experiences would provide a valuable insight into several unanswered questions in the field of solar physics. Questions like, “What does vaporization feel like?”

Sean Sellers is a PhD candidate in astronomy at NMSU, studying Solar Astrophysics. He can be reached at sellers@nmsu.edu.

This entry was posted in Astronomy in the news. Bookmark the permalink. Follow any comments here with the RSS feed for this post. Both comments and trackbacks are currently closed.

« When black holes collide: Puzzling out the strange light of dead stars by Wladimir Lyra
That crazy little thing called life — on Venus? by Chris Churchill »