A mission to the Moon is once again in NASA’s sights as they prepare project Artemis. If NASA is going to permanently establish a human presence on our celestial neighbor, they need to make sure astronauts have everything they need in order to survive. A recent finding by SOFIA unveiled trace amounts of water on the sunlit surface of the moon, but humanity will need more than what is present on the surface. New research by NMSU astronomers has been studying what lies beneath the surface, including water ice, that could supplement the water supply found on the surface.

Project Artemis follows a long line of NASA lunar missions. In 2009, NASA launched the Lunar Reconnaissance Orbiter (LRO) which carried the shepherding spacecraft, Lunar CRater Observing and Sensing Satellite (LCROSS). The goal of the LCROSS mission was to determine if water ice was present on the moon. While newly found on the sunlit surface, it is thought that water ice can only survive in permanently shadowed craters on the Moon. That is, craters that are never directly exposed to solar radiation, like those near the poles. The Atlas V’s Centaur upper stage rocket that launched LRO was sent on a trajectory to impact the lunar South pole inside of the permanently shadowed Cabeus crater. Four minutes after the impact, the LCROSS Shepherding Spacecraft flew through the debris plume to collect and send data back to Earth, before also impacting the moon and creating a second debris plume. 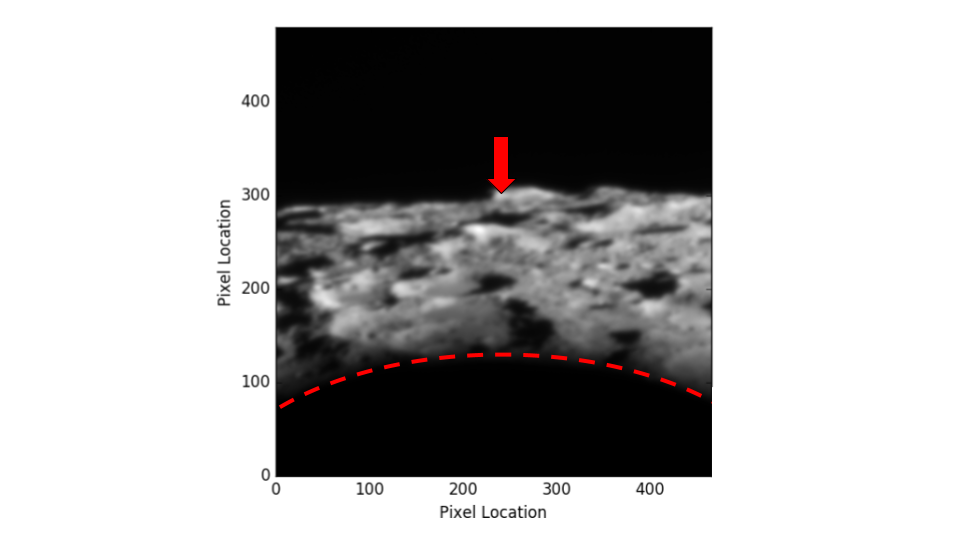 An Agile image taken 25.5 seconds after impact with no PCA filtering, with a red arrow indicating the location
of Cabeus crater. The dark curve in the lower half of the image, indicated by the dashed red line, is the “lunagraph” used
by Chanover et al. (2011) to reduce scattered light from the disk of the Moon. The lunar landscape and the ground-based
atmospheric seeing dominate the scene, and the plume is not discernible.

Astronomers at NMSU took ground-based images of the impacts using the 3.5m telescope at Apache Point Observatory, about two hours North of NMSU’s main campus. Images of the debris plume coupled with in situ spacecraft data allow for scientists to study the layers of the lunar surface. Kristen Luchsinger, an astronomy graduate student, recently published work on a model that she developed to explore the characteristics of these layers.

Luchsinger modeled layers of the lunar surface using varying amounts and depths of water ice, regolith, and “bedrock”, or non-ejected, layers. Each layer reflects different amounts of light. By placing a dark layer deep below the lunar surface, she created a simulated plume that reflects the same amount of light over the plume’s lifetime when compared to the plume LCROSS flew through. The model that best fits the observed plume suggests that as you move deeper into the lunar surface, there may be an increase in water ice concentration.

Water beneath the surface of the moon is not a new idea, but the composition of the layers that make up the outer crust is different from what scientists expected. Luchsinger found that on average, the concentration of water ice within the lunar sediment is about 8.2% by weight.

“The model’s best predictions are with a blend of lunar regolith and water ice. It was expected that material down to 10 meters below the surface would be ejected into the debris plume, but observations show that material was only ejected down to about six meters.” Luchsinger said. This suggests that the material at six meters below the surface has a higher tensile strength than previously thought. Plausible materials with high tensile strength are bedrock, boulders, or a very cold regolith-ice mixture with a high ice concentration.

There is more research to be done to determine what lies 6m below the lunar surface, and upcoming missions planned to the lunar South pole will provide more data to help astronomers narrow down the composition of the deeper layers.

In the immediate future, Luchsinger will be developing a model examining the deposits of water near the surface within seasonally shadowed regions. She hopes that studying how water ice behaves in these dynamic regions could help scientists understand the source and behavior of water ice near the lunar poles.

More details on Artemis can be found on NASA’s website: https://www.nasa.gov/specials/artemis/

This entry was posted in Paper Spotlight, Science Highlight. Bookmark the permalink. Follow any comments here with the RSS feed for this post. Both comments and trackbacks are currently closed.