The statistical study of solar dimmings and their eruptive counterparts

Results are presented from analyzing the physical and morphological properties of 154 dimmings (transient coronal holes) and the associated flares and coronal mass ejections (CMEs). Each dimming in the catalog was processed with the semi-automated Coronal Dimming Tracker (CoDiT) using Solar Dynamics Observatory AIA 193 Å observations and HMI magnetograms. Instead of the typically used difference images, the transient dark regions were detected “directly” in extreme ultraviolet (EUV) images. This allowed us to study dimmings as the footpoints of CMEs—in contrast with the larger, diffuse dimmings seen in difference images that represent the projected view of the rising, expanding plasma. Studying the footpoint-dimming morphology allowed us to better understand the CME structure in the low corona. While comparing the physical properties of dimmings, flares, and CMEs, the relationships between the different parts of this complex eruptive phenomenon were identified: larger dimmings were found to be longer-lived, which suggests that it takes longer to “close down” large open magnetic regions. During their growth phase, smaller dimmings were found to acquire a higher magnetic flux imbalance (i. e., become more unipolar) than larger dimmings. Furthermore, the EUV intensity of dimmings (indicative of local electron density) was found to correlate with how much plasma was removed and how energetic the eruption was. Studying the morphology of dimmings (single, double, fragmented) also helped identify different configurations of the quasi-open magnetic field.

Dr Larisza Krista received an MSc degree in astrophysics in 2007 from Eotvos Lorand University, in Budapest, Hungary. She did her PhD at Trinity College Dublin (Ireland) as a Government of Ireland Scholar, on “The Evolution and Space Weather Effects of Solar Coronal Holes”. She moved to Boulder in 2011 to accept a research scientist position at CU/CIRES in residence at NOAA/SWPC. She has also been a long-term scientific visitor at the High Altitude Observatory, where she collaborates with Dr Scott McIntosh. Her main interests involve the evolution of open solar magnetic field regions over the solar cycle as well as the related heliospheric structures and geomagnetic effects. 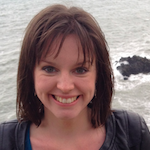